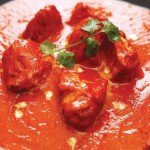 So what is Chicken Tikka Masala (or “CTM” as it is sometimes known)?

It is basically chucks of Chicken Tikka marinated in yoghurt in a spicey tomato masala sauce.  Masala pretty much means a “mixture of spices”, so there are many many different versions of this classic curry, some of which are great, but in my experience they are usually at best average. 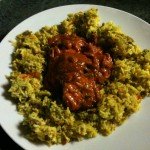 (Just a little tip, I wouldn’t search for the that term on Google images unless you are a man who prefers the company of a man…)

I first tried the Cinnamon Lounge’s Chicken Tikka Chilla Masala over Christmas when we went there with some friends.  I saw it on the menu and was tempted by the chillis, but was put off by the Tikka Masala element.  Anyway, one of our party ordered it and we all had a try and I have to say it was fantastic – I normally like curries slightly hotter and the Chicken Tikka Chilli Masala certainly was that…. 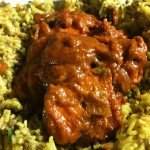 Chicken Tikka Chilli Masala Extreme Close Up - Can you feel the heat?

Last weekend Mrs Currytastic and I decided to have a take out and opted for the Chilli Masala from the Cinnamon Lounge and I’ve got to say I’m glad we did.  Rich, full of flavour and spicey enough for the very spicey people I wasn’t at all disappointed.