I have to say that this is my all time favourite curry recipe.  Given the choice about what to make, then I love a Keema Mater (which is also known as Keema Peas) – It’s the one I will always go for.

What is Keema Matar?

A Keema Matar is a relatively dry curry that typically uses minced or ground lamb or beef with spices and peas.

Although this recipe is made with keema, which is typically lamb mince (ground lamb), it can be equally made with beef mince, quorn or soya mince.

In fact, truth be known, I also quite enjoy the quorn version, although I tend to prefer it with lamb as it seems to have more richness / flavour.

The dish is perfect when eaten with roti or rice, although in my opinion the pairing of keema with a chapatti is second to none.

Keema Matar Origins – Where Is Keema From?

Keema Matar tends to be a staple curry for many Bengali or Pakistani families and has become a firm favourite for many.

It’s origins seem to date back to the early times of the Mughal Empire where it was a favoured dish.

As I write this, it’s not that common on restaurant or takeaway menus which is a bit of a shame as it’s a fantastic curry.  Full of flavour and spice.  And the sweetness of the peas works really well with the lamb to beef.

Happily, it’s a great pleasure to make at home.

I first encountered this dish whilst at school – I was invited for tea (dinner) at a friend’s house (Hi Tak), and his dad used to cook a huge pan of Keema Matar more or less every week.

That’s what we were having that day.

It was an instant hit for me and every time I was invited to their house I hoped we would be having Keema Matar again.

Or if not that, then my 2nd favourite – Keema Aloo… 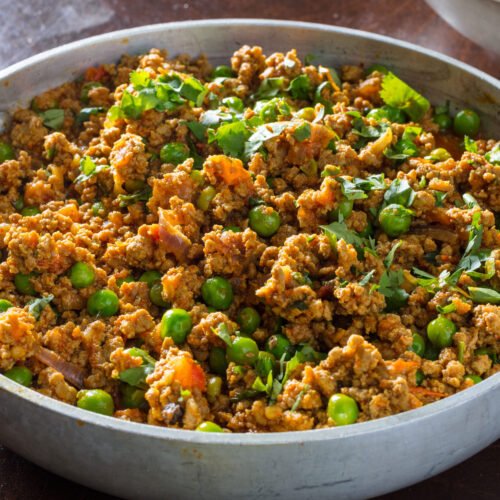 This is my all time favourite curry and then one I make more than any other. This authentic one-pot keema curry recipe is easy to make, and provides the most tasty curry! With my delicious keema curry recipe, you're definitely in for a treat.
Print Recipe Pin Recipe
Prep Time 10 mins
Cook Time 30 mins
Total Time 40 mins
Course Main Course
Cuisine Indian
Servings 4 people
Calories 400 kcal

As with pretty much all curries, Keema Peas gets better if made a day or two before you eat it.  Once it's cooled, store in the fridge and then reheat later.

Keema means ground meat in Hindi. It can be any ground meat. Lamb, beef, goat or even chicken.

Unsurprisingly, a keema stands or falls on the quality of its meat – it’s usually made with lamb or mutton, but beef keema is also found in communities where the cow is eaten.

Can I use Chicken Keema?

Yes you can.  Traditionally the Keema Mater is made with lamb and sometimes beef, but you could use minced or ground chicken and even turkey if you wanted to go for a slightly healthier version of this wonderful cut.

Is Keema Matter the Same as Keema Peas?

Keema Mater is exactly the same as Keema Peas.  Mater is the Hindu word for peas.  Keema can also be spelt differently too, as Qeema.

How Many Calories are in Keema Mater (Keema Peas)?

The calories in this curry can vary depending on how lean the mince is.  Using supermarket bought lamb mince as per this Keema Peas Recipe here, a typical portion will provide approx 400 calories.

Is Keema Good for your Health?

As tasty as it may be, keema should only be consumed in moderation because it can be quite high in sodium and a high sodium diet raises blood pressure.

Additionally, keema contains other vitamins and minerals such as  potassium, which helps control blood pressure, and vitamin A, which helps with vision.

Take a look at some of my other Curry Recipes

My Chicken Pasanda recipe is sure to be a family favourite and my spicy mint raita recipe is a great accompaniment for any curry.

Thanks for reading and please feel free to post any questions in the comments, – Or why not just tell us about how your Keema Mater turned out?