This is my favourite Chicken Madras recipe – And believe me, I should know as I’ve pretty much tried all of them…But time and time again, this recipe is the one I keep going back to.

Loosely based on a Gordan Ramsey recipe, over the many years I’ve been making it, it’s has been “tweaked” and “tuned” into what is most probably the most liked Chicken Madras Recipe online Don’t believe me?  Check out the comments section below…

What are the origins of a Chicken Madras? 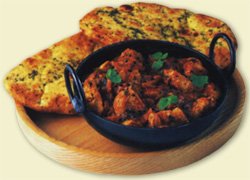 The Madras curry is thought to have originated in what was the city of Madras, which is now known as Chennai.  Chennai is in the south east of India in the southern Indian state of Tamil Nadu. The dish is popular in other parts of India as well as in many other countries, including the UK, where it is often served with rice or naan bread.

It’s a spicy curry that can be made with chicken, pork, beef and even minced beef or lamb as a Keema Madras.

If you’re not a meat lover then you can also enjoy a Vegetable Madras which can be made using carrots, parsnips, sweet potatoes, turnip or swede etc cubed into 2cm chunks.

You will also need to reduce the cooking time depending on what vegetables you decide to cook with.

What’s in a Chicken Madras?

The ingredients of a traditional Chicken Madras recipe will change depending on what ingredients are available locally and also by the traditions of the chef or cook, so you will find lots of variety with this particular curry.

Typically a madras curry has a reddish colour which comes from the red chillies and turmeric and a slightly sweet and sour taste that comes from the tomato and lemon, lime or vinegar. 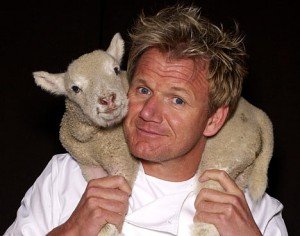 Anyway, as I’ve already mentioned this recipe is loosely based on a Gordan Ramsay Chcicken Madras recipe which has been adapted slightly for a spicier palette.

The ingredient quantities as listed below should be enough to make 4 portions and should take approx 40-50 minutes total time with 10-15 minutes prep time and 30-40 minutes cook time.

The following spices can be varied to your own personal taste, but if this is your first time with this recipe, then I’d suggest the following:

How to Make Chicken Madras Curry

Cut the chicken into strips or cubes and put aside. Heat the oil and add the onions and cook until they start to soften which will be about 5 or 6 mins.

In that time, season the chicken you set aside earlier with the salt and pepper and add to the pan and cook stirring the pan until the chicken begins to go golden brown all over.

At this stage you’ll want to add approx 1/2 of the water and the chopped tomatoes and then bring to boil. Once the pan is boiling, reduce the heat to a simmer and cover the pan stirring ever so often.

Let it simmer for about 30 minutes and add more water as needed if it begins to stick or the sauce becomes too dry – remember to stir well if you do need to add water.

At the end of the 30 mins, stir in the garam masala and leave uncovered for another 10 mins, again taking care not to let it dry out.

When the cooking’s finished and you’re ready to serve the chicken madras, garnish it with some coriander leaves (not the stalk!).

What to Serve with your Chicken Madras Curry?

I usually have it with rice or a Garlic and Coriander Naan bread with a big dollop of Mango Chutney.

It is equally as good with chips(!), a jacket potato or even and this is controversial…in a large Yorkshire Pudding! 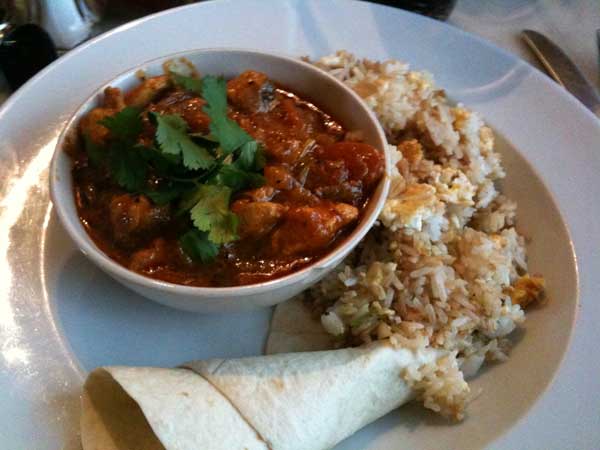 This is my all time favourite recipe for Chicken Madras, and I should know as I've tried most of them over the years.It's quick and easy to make and is a great Friday Night treat. Once you've tried this you'll be ditching the takeaway menu...It really doesn't get any better than this.
Print Recipe Pin Recipe
Prep Time 20 mins
Cook Time 40 mins
Course Main Course
Cuisine Indian
Servings 4
Calories 300 kcal

As with most curries this Chicken Madras gets better if you cook it the day before and leave it to sit overnight in the fridge. From a unique slant on an authentic Chicken Madras, instead of normal chicken, I sometimes use the chilli chicken tikka made from this recipe ...

Calories: 300kcal
Keyword Chicken, Madras, Spicy, Curry
Tried this recipe?Let us know how it was!

If you’ve read through any of the hundreds of comments below about this chicken madras recipe, you’ll see there have been lots of questions asked about this recipe over the years, so I’ve answered some of the most popular ones here…

Is this Chicken Madras Recipe Spicy?

If you love spice, then you’ll love a madras curry. This Indian dish is packed with flavor and heat, making it a perfect choice for those who enjoy a little bit of spice in their food. While the level of spice can vary depending on the recipe, a typical madras curry is going to be fairly spicy. If you can’t handle the heat, you can always tone it down by adding less of the spices that make it hot. But if you’re looking for a dish that will give your taste buds a workout, a madras curry is definitely worth trying.

Is a Madras Curry Spicier than a Jalfrezi?

Yes it is and that’s just how it should be.   A madras should always be hotter than a jalfrezi.  This is because you should be adding more chilli when making a madras curry.

What’s the Difference between a Madras and a Vindaloo?

There are many differences between a Madras and a Vindaloo, but the two most notable differences are the ingredients and the level of heat. A Madras is a curry that originates from the South Indian city of Madras (now known as Chennai).

The dish is usually made with a mixture of spices including chilli powder, cumin, coriander, and turmeric. The level of heat in a Madras varies depending on how much chilli powder is used, but it is generally considered to be a relatively spicy dish.

A Vindaloo, on the other hand, is a curry that originates from the Portuguese colony of Goa in India. The dish is usually made with a mixture of chili peppers, garlic, vinegar, and other spices. The level of heat in a Vindaloo is usually much higher than a Madras, and it is often considered to be one of the spiciest dishes.

Does this Chicken Madras Recipe have Dairy?

If you follow this recipe and cook with vegetable oil instead of using a traditional ghee, then your madras will be daIry free.

Is this Chicken Madras Recipe Healthy?

The recipe as it stands is delivers approx 250-300 calories per serving and provides you with approx two of your five a day suggested vegetable and fruit portions.  You can reduce the amount of oil or could even add some more veg to recipe in order to make it as healthy as possible.

Rich in immune boosting antioxidants and may help lower blood sugar. It may benefit heart and brain health and it can even help fight infections

Chilli can improve heart health and help with nasal congestion. It can also improve eye health and build immunity to fight certain diseases.

Ginger is loaded with antioxidants, compounds that prevent stress and damage to your body’s DNA. They may help your body fight off chronic diseases like high blood pressure, heart disease, and diseases of the lungs, plus promote healthy ageing.

Packed with nutrients including Vitamin A, Vitamin C, and lycopene among others.

What Defines a Madras Curry?

When made correctly, a Madras curry should be a balance of heat and flavor.

The chili powder & chilli peppers provide the heat while the cumin, coriander and turmeric as well as the grams masala give the dish its signature flavour.

Try My Other Recipes…

Chicken Madras not hot enough? Try my Chicken Vindaloo Receipe or for a new slant on the UK’s favourite curry, take a look at my Chicken Tikka Chilli Masala Recipe

Thanks for reading and please feel free to post any questions in the comments, – Or why not just tell us about how your chicken madras turned out?

289 thoughts on “Is this the BEST Chicken Madras Recipe Ever?”